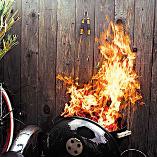 Every year, residential complexes suffer severe damage or loss from fires that begin with an open-flame cooking devise being operated on a balcony. According to the U.S. Fire Administration there is an average of 6,500 grill fires each year, resulting in almost 27 million dollars in fire loss. New regulations governing the operation of open-flame cooking devices, such as barbecue grills, are presented in the 2005 Ohio Fire Code, which went into effect on September 1, 2005. This code was adopted by Ohio Department of Commerce, State Fire Marshal Division and is effective statewide.

Please note: These rules apply only to multi-family structures larger than a duplex. The code does not prevent the use of cooking devices on the decks of single-family and two-family dwellings.

According to Rule 3 of the 2005 Ohio Fire Code, General Precautions Against Fire: Section 308 Open Flames 308.3.1 Open-flame cooking devices, the operation of a charcoal burner, or any other open-flame cooking device, is prohibited on combustible decks and balconies. In addition, these devices shall not be used anywhere within 10 feet of combustible construction, which could include a nearby wall, overhang, patio fence, railing, or the deck above your own deck or patio.

In addition, any cooking device using propane fuel is subject to regulation, depending on the size of its fuel container. Any device using a fuel container larger than one-pound is prohibited on combustible decks and balconies. In addition, these devices shall not be used anywhere within 10 feet of combustible construction, which could include a nearby wall, overhand, patio fence, railing, or the deck above your own deck or patio. It is worth noting that the typical gas grill utilizes an LP container with a nominal capacity of 20 pounds of LP gas.

If you have further questions about using cooking devices on multi-family dwelling balconies, please call the Colerain Township Fire Department at 513-245-6505 or you may contact The Ohio State Fire Marshal Code Enforcement Division at 614-728-5460.